Xieyanshi will attend The 18th AAITF2019 in Shenzhen.

Welcome to visit us.

How to get to SZCEC

SZCEC is only 30 minutes from Shenzhen Railway Stationand Luohu check point by bus, or

15 minutes by metro.It is only 30 minutes form Shenzhen Air Port by bus.

• From the airport or railway station: Only 30 minutes on Metro Line 1 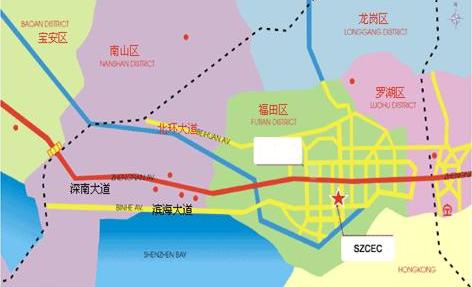 1. by trainGetting to Shenzhen from downtown Hong Kong is simple, as it takes less than an hour on a KCR train. The KCR train connects East Tsim Sha Tsui to Lo Wu and Lok Ma Chau with several intermediate stops. It  interchanges with the urban section of the      MTR at Kowloon Tong Station and East Tsim Sha Tsui Terminal.

The journey from East Tsim Sha Tsui to Lo Wu or Lok Ma Chau takes 40-60 minutes and costs HK$33-36.50, first class is            charged double. Trains depart every few minutes but some short trips are operated in  rush hour, so check the destination             screen   before boarding. The train can be crowed during rush hours as it serves millions of commuters along the line as well.

After you go through the immigration at Lo Wu or Lok Ma Chau, you can take the Shenzhen Metro (Line 1 at  Lo Wu costing RMB 4, and Line 4 at Lok Ma Chau costing RMB 2) to the fairground whose station name is  Huizhan Zhongxin (Shenzhen Convention & Exhibition Center). Of course, you can take a taxi. It costs around RMB 30 from Lo Wu, and less than RMB 20 from Lok Ma Chau).

2. by busThere are very frequent bus services that can take you from the Hong Kong downtown to Huanggang border. You can take such   buses in Mong Kok, Prince Edward, Jordon, Kwun Tong. The journey takes  40-60 minutes, costs around HKD 30-40. Services    hours are 0:00-24:00.

1) MetroWe highly recommended you to take metro to fairground.